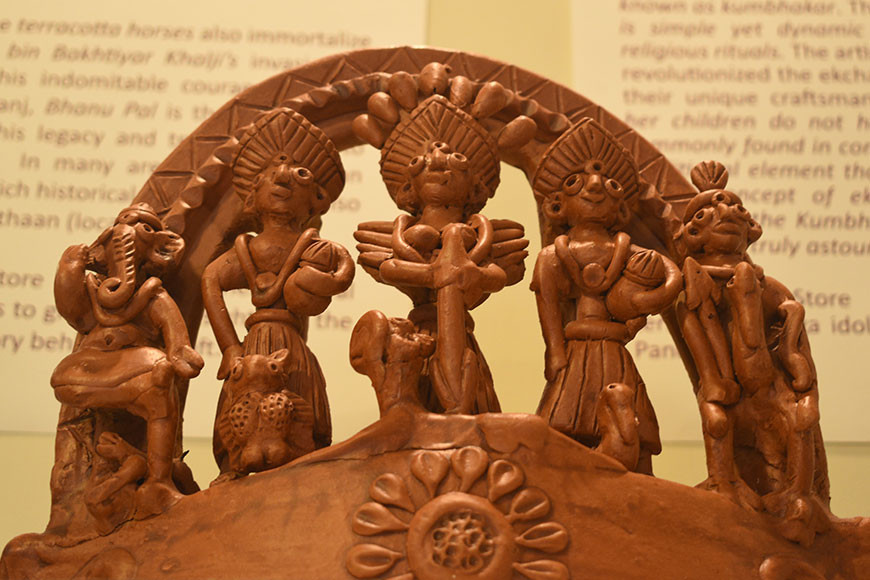 The Terracotta village of Panchmura

The terracotta art of Bankura has evolved with the passage of time. In Italian, terracotta means baked earth which is generally brown or reddish in colour. According to archaeological study, this primitive terracotta art dates back to Indus valley civilization where it was used to decorate walls of the temple and vessels. Panchmura, a hamlet located around 23 kilometres away from Bishnupur, has taken the terracotta art form to a whole new dimension. It is primarily the hub of artisans and the terracotta artistry practiced by them is simple yet dynamic and has its origin in religious rituals. The terracotta products crafted by them include jewellery and magnificent home décor.

Historically, Malla Kingdom patronized cultural activities and invited high caste Brahmins, expert craftsmen and masons to Bishnupur, who contributed to the trade and commerce of the region through culture and religion. Presently, the Bankura artisans gradually are scattered to different parts of the country. Only the remaining few of Panchmura are still struggling to keep this art form alive. Presently, around 70 families of Panchmura practice the family based tradition of pottery. All these craftsmen of Panchmura have a common surname- Kumbhakar which means potter in English. Generations have lived by practicing this form of art and the youth also takes an active participation in it presently. The terracotta industry has learnt to cope up with the changing demands of the contemporary society. Many artists have received many awards, accolades and global recognition for their wondrous terracotta art. Most of the artists have been chosen to stay back in this terracotta village and pass on the skill to the next generation. Most importantly, the potters of Panchmura have practiced this art form through a manual process through the years. No technological intervention comes in this process.

Pottery in this village is not a male driven process. The entire family of the potters takes part in this art. The women are well versed with all the processes involved and extend an equal hand of support. The wheel is an auspicious object for the potters. They start modeling clay models from mid-May only after they worship and pay gratitude to their wheels through chaka puja. The wheel remains idle on the month of Baisakh( April- May) as per the English calendar. Etel mati is a special kind of clay which can be found after digging 4-5 feet deep under the surface. This clay is resourced from Pattetul and Basgurh in Panchmura and kept in stock by the potters for the entire year. The entire process of this craftsmanship includes clay refining and mixing, moulding, drying and firing the objects. The potters constantly incorporate new designs and try them out in the market. Previously, there were more than 300-400 craftsmen but the number has dwindled as most of them have opted for other business. The Kumbhakars of this Panchmura spread the magic of their craft by offering training to other people. They also organize a Terracotta festival every year in the month of November every year where the artifacts crafted by them are displayed and various workshops are conducted.

Bengal has still been able to hold on to the quintessential traditional ‘ek chala thakur.’ The concept of ekchala thakur, with Goddess Durga and her children set against one common backdrop came into being during the time of Raja Krishnachandra. The terracotta durga idol crafted by the potters of Panchmura has an unmatched aesthetic charm. The Goddess and her children do not have traditional features commonly found in conventional idols. The only traditional element that remains constant here is the concept of ekchala. The tribal touch offered by the Kumbhakars makes this miniscule ekchala Durga idol truly astounding. The Bengal Store presents to you the terracotta durga idol crafted by the fantastic potters of Panchmura which will certainly turn out to be a precious asset for your household.