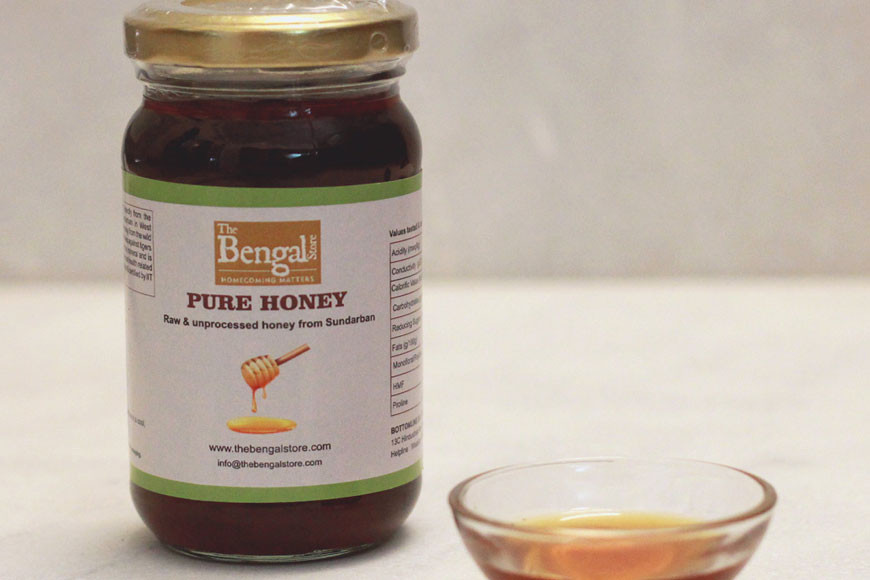 Honey from the Sundarbans, and the story behind it

The life of a honey collector is not an easy one, particularly for those in the Sundarbans. The reason is easy enough to pinpoint – attacks by man-eating tigers. The Royal Bengal Tiger, pride and joy of the Sundarbans, is also the biggest threat to honey collectors in the region. Since the beginning of this year, of the several lives lost to tiger attacks, at least six were ‘mauli’ (the Bengali word for honey gatherer). This, despite the many prescribed methods designed to persuade tigers to leave humans alone.

Tanmoy Mandal, a former mauli who now coordinates the task of honey collecting by others of his tribe, says at least three of the deaths have occurred in the past couple of months, particularly among collectors who operate on their own, not necessarily with a government permit which, once issued, can be renewed for generations.

In recent years, a few apiaries have come up in the area, to boost apiculture and safer ways of gathering honey. Nonetheless, the raw honey that reaches our shelves has a history of hardship and immense courage behind it.

This is quite apart from the innumerable health benefits of raw (as opposed to pasteurised or processed) honey. To begin with, raw honey comes straight from the beehive, contains bee pollen which is very good for you, bee propolis, and numerous antioxidants.  You should not get distracted or carried away by the advertising upsurge presently being seen across media to sell ‘pure’ honey to boost your immunity.

What many may not know as readily is why raw honey is so good for you?

Well, the immediate answer is that raw honey is not filtered or pasteurised, though a basic filtration process does eliminate the larger impurities. Pasteurisation involves heating the honey, which kills yeast cells. This changes its taste, helps it last longer, and gives it the distinctive golden-brown appearance which most of us know. However, pasteurisation is also very likely to eliminate several nutrients that raw honey contains.

On an average, one tablespoon or 21 gm of raw honey contains 64 calories and 16 gm of sugar.A little over half of this sugar is fructose, which may not be beneficial for everybody. However, despite the fructose content, raw honey is still a healthier option than table sugar. In fact, some research even suggests that honey offers protection against diabetes,while some types of honey may also help improve cholesterol levels.