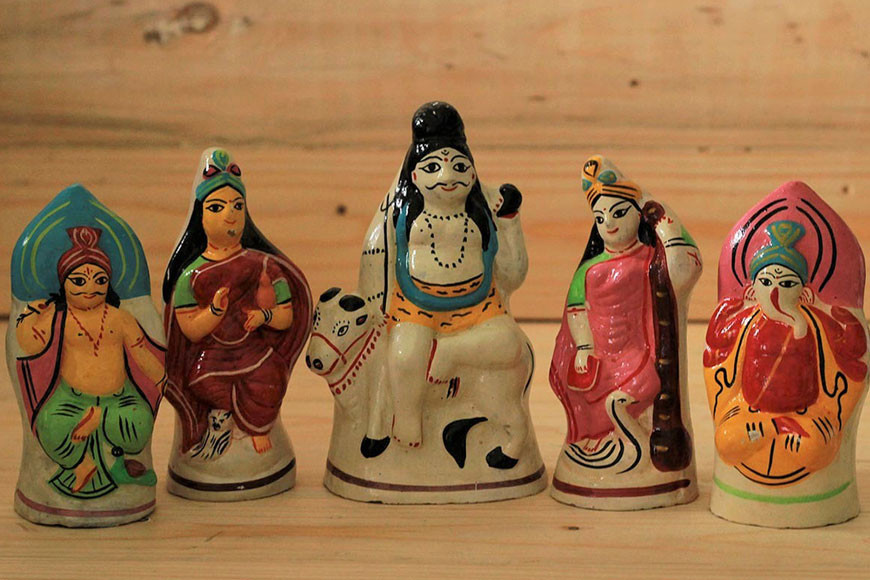 Lying at the gateway of the ancient gateway of Adi Ganga, Sundarbans, Majilpur is a city known for making exquisitely crafted fired clay dolls. The area came to be known as Majilpur in the 17th century only after human settlements took place. The art of crafting fired clay dolls is a primitive art form that the artisans of Majilpur has still been to keep alive even in the present times.Crafting clay dolls is an ancient tradition of Bengal. The diversity found in this indigenous art form of Bengal might amuse you. The dolls crafted in various corners of Bengal have distinctive features that make each of these creations unique in its own way. The dolls of Majilpur, similarly, belong to a whole new genre and truly possess an unmatched appeal that sets it apart from the other dolls. Almost 200 years back, the zamindar family of Duttas from Jessore, Bangladesh, came to Majilpur and started living there. Kalicharan Peyada, who was the security personnel of the zamindars had a special talent. He could craft spectacular idols and dolls made of clay. Tepa putul or hand pressed doll crafted by him was truly a creation to marvel at. Janakinath Das, was the descendant of Kalicharan Das whose son, Harinath Das started this legacy of crafting these dolls, which came to be known as Majilpur dolls.

This unique craftsmanship was passed on to Manmath Das, who carried forward the legacy with great expertise. He also received the President’s award in 1986 for his magnificent creation- Jaganath, Balaram and Subhadra. Panchu Gopal Das was another notable artist who made many dolls of this genre which especially include the local deities.Presently, this particular genre of dolls is on its last legs. Shambu Das, the grandson of artist Manmath Das, is the only artist who is striving to keep this art form alive. The dolls crafted in Majilpur look full of life and vibrant because of the use of colours. Garjan oil, further enhances the lustre of these dolls. In the yesteryears, many Majilpur dolls were crafted to mock the arrogance and superficiality depicted in the Babu culture. These dolls have a huge popularility even today. Deities like Radhakrishna, Kaliyadomon, Jogoddhatri, are also subjects of Majilpur clay dolls. The other intriguing characters that come up through the wondrous Majilpur dolls are Bonbibi, Dakshin Roy and girl with a pitcher.