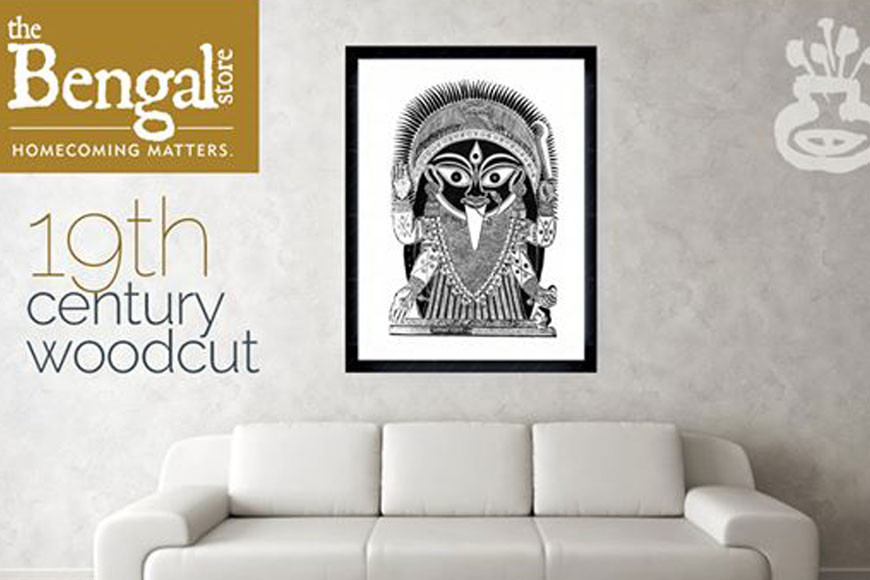 Kali and the Battala print

The Battala woodcut was the popular art of 19th century Calcutta and was the only indigenous art activity of that time which could be termed as a ‘school’. It was the earliest hub of printing and publishing in colonial Calcutta. Battala woodcuts created an interesting visual narrative whose archival value is often ignored by many. Benimadhab Bhattacharya’s Kali created a prolific impact and had a far-reaching influence on the semi-educated Bengalis and the British in those times. The woodcut was not only gigantic but had a magnetic and mesmerizing appeal to offer which caught the attention of the connoisseurs.

Panchanan Karmakar was a Battala printmaker who revolutionized Battala art and the printing industry evolved rapidly. The art which made its debut as book illustrations, later developed into a unique and unparallel style. The Battala artists practiced broadsheet woodcut where they could truly bring out the artists in them. Much like the patuas of Kalighat, they could give now wings to their artistic expressions and would not be bound to adhere to the whims of publishers and writers. These woodcut broadsheet engravings were usually by products of their artistic frame of mind.

This soon became a flourishing trade and the printing production units began to throng places like Ahiritola, Kumurtuli, Shobhabazar and other places of North Calcutta. Black and white was the only two shades used in these woodcuts. The creation was such that people never felt the absence of colours. Among these, very few prints survived the cheap paper and humid conditions. Benimadhab’s Kali was a rare wood cut from the era of Battala printers which created a history of its own.

Benimadhab’s depiction of Kali was a unique embodiment of time, creation and destruction. The face of Benimadhob’s Kali is similar to that of Puri’s Jagannath. Benimadhab refrained from drawing the feet of Kali. The hand on the upper left of Kali carries a kharga while the hand below carries the head of the asura (asura munda). The hands on the right show abhayamudra and sampradan mudra. Mundamala, the garland of several human heads or skulls adorn the neck of the dark Goddess. Inspired by the creations of the goldsmiths of Garanhata, Benimadhab created the similar jewellery designs for the Goddess. The concept of white coloured Phiringee hands enhances the historical value of the painting and creates a sense of inexplicable mysticism at the same time. The lustrous dark face and white hands create a contrast which brings in a unique dimension to the portrayal of Kali.

But the painter believed in artistic freedom and refused to give an explanation behind creating such a contrast. Many say that he used this interplay of black and white to create an illusion. Benimadhab’s Kali truly revolutionized the woodcut broadsheet genre. 200 years have passed by since then. The very first sight of Benimadhab’Kali still leaves an impact that would never fade with the passage of time.

The Bengal Store presents this version of the creation of 19th century Battala woodcut which is long lost from public memory. The Dark Goddess of Kalighat, originally carved out on wood by Benimadhab Bhattacharya has been plate-litho transferred by The Bengal Store for you.